The Rose Canyon fault zone is located along the I-5 from La Jolla through downtown San Diego. The fault zone then continues offshore beneath San Diego bay as a series of faults that cut across the Silverstrand. Eventually, the Rose Canyon fault zone steps to the Descanso fault which follows very near the coast of northern Baja, Mexico. These fault zones are potential hazards to the people of San Diego county and Tijuana. We seek to understand how these different faults interact and how often they slip to produce earthquakes. It's important to know if the faults all rupture at once because a longer rupture length results in a larger earthquake. It's also important to know the history of earthquakes on these faults so that we can better prepare for possible future events. We are collecting geophysical data in San Diego bay to map the faults and measure offsets. These offshore data can then be compared to onshore data on the Rose Canyon fault system to identify patterns in the fault zone rupture history.

We are collaborating with anthropologists to identify submerged archaeological sites offshore from the Channel Islands in southern California and offshore the central Oregon Coast. During the last glacial period, sea level was up to ~120 meters below where it is today. That means the area that makes up the continental shelf that is now underwater was exposed for people to move around on and inhabit. The earliest people arrived in North America during this time of lower sea level, and therefore an important piece of the puzzle about human migration to North America may be underwater. We are investigating areas with sonar techniques and sediment coring to try and map the paleolandscapes and resources (i.e. river systems, estuaries, caves) that would have been available to these early people. The collected data will also be used to model sea level changes and to develop a tool for identifying areas with a high probability of archaeological resources. We are also using the data to understand controls on river morphology during a sea level cycle.

Subaqueous landslides are known to be ubiquitous across the Mississippi River delta front and have been identified as a hazard to offshore infrastructure. Among other factors, sediment accumulation rates and patterns play an important role in governing the stability of delta front sediment. High sedimentation rates result in underconsolidation, slope steepening, and increased biogenic gas production, which are all known to decrease stability. Triggering of slides has been linked to hurricane waves which increase the stress on the seafloor. We are analyzing data to understand better the triggering, timing, and distribution of slides on the Mississippi River delta front.

We have also assessed multiple historic seafloor datasets on of the delta front to show that the delta has entered a stage of decline, coincident with anthropogenic alterations to the Mississippi River that have resulted in reduced sediment load.

The importance of tectonics and fluid flow in controlling cold seep habitats has long been appreciated at convergent margins but remains poorly understood in strike-slip systems. We analyzed geophysical, geochemical, and biological data from an active methane seep offshore from Del Mar, California, in the inner California borderlands. The location of this seep appears controlled by localized transpression associated with a step in the San Diego Trough fault zone and provides an opportunity to examine the interplay between fluid expulsion and restraining step overs along strike-slip fault systems. These segment boundaries may have important controls on seep locations in the inner California borderlands and other margins characterized by strike-slip faulting (e.g., Greece, Sea of Marmara, and Caribbean). The strike-slip fault systems offshore southern California appear to have a limited distribution of seep sites compared to a wider distribution at convergent plate boundaries, which may influence seep habitat diversity and connectivity.

Low-energy, high-resolution geophysical surveys will be conducted throughout the Sacramento-San Joaquin Delta to map the location of faults and document rupture history. These data can be used for more accurate seismic risk assessments in the Delta, which will help Delta management make better informed decisions for the Delta moving forward.  Our generated fault map will be the first time that the geographic locations of Delta “blind” faults have been mapped throughout the Delta waterways. This type of research has previously been identified as a critical first step in order to map the faults in the Delta and assess their effects on levees. Accurate and detailed mapping of fault locations is necessary to make models of earthquake history and hazards and the threats they pose to levees. This information, along with evidence/timing of seismic events, will be pertinent to understanding seismic risk to the Delta and will contribute to future hazard assessments. With the rapid rate of sea level rise, the threat to the Delta’s levee system is greater than ever. Levee failure can occur in many ways, including slumping and erosion from storms and high winds, seepage through internal degradation, and liquefaction of the levee sediments during an earthquake. Failure of the levees would ruin valuable agricultural land, contaminate freshwater, and destroy habitats. 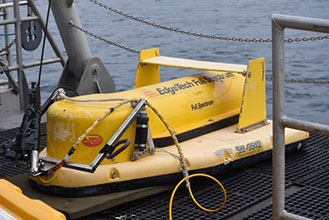