Like the Louisiana coast, the Gulf seafloor is rapidly eroding, research finds

by Tristan Baurick, The Times Picayune

Louisiana's land loss crisis doesn't stop at the coast. New research has found that the seafloor extending from the Mississippi River Delta into the Gulf of Mexico is also eroding at a rapid rate, potentially putting offshore oil and gas infrastructure at risk and allowing hurricanes to hit the coast with greater force... 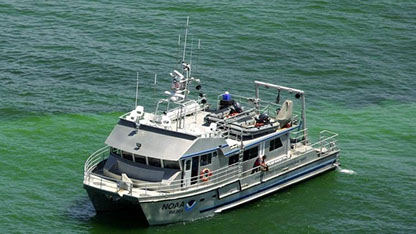 Dr. Jillian Maloney and SDSU to search seafloor for artifacts of "First Americans"

San Diego State University plans to search the seafloor off Southern California for clues that could help answer two of the oldest and most contentious questions in science:

When did the first modern humans arrive in the Americas? And did they initially spread south from Siberia by following ancient Pacific shorelines that are now covered by water?

San Diego State and its partners will use sensors to look for areas in the northern Channel Islands that might have been human settlements thousands of years ago when the sea level was lower and the land was exposed.

Scientists said these “submerged cultural landscapes” might contain remnants of the tools that the “First Americans” used for fishing, hunting and boating, as well as sites where they cooked shellfish.

The $900,000, federally funded study is scheduled to unfold during the next four years. It represents the largest underwater archaeological expedition of its kind conducted off Southern California...

Listen to Dr. Maloney's Interview with